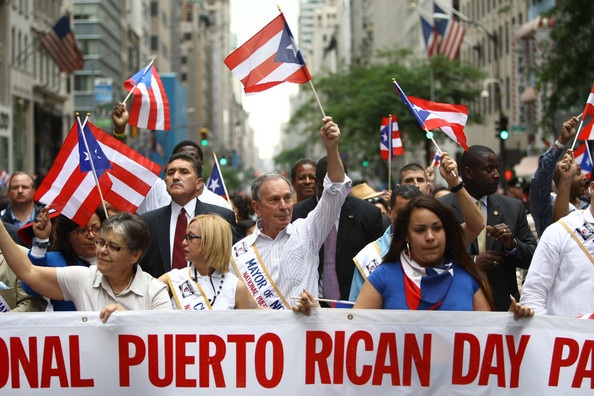 A photo from an earlier Puerto Rico Parade with former New York Mayor Michael Bloomberg
Hector Colon, native of Puerto Rico and a resident in New York City, would like to be at the Puerto Rico's Annual Parade, Sunday on Fifth Avenue in Manhattan, for one reason - to see Jennifer Lopez (Jelo).
But he said since he has other plans aside from the wish to see Jelo, (also a Puerto Rican, who many of her compatriots hold in high esteem) he would prefer to be at a barbecue, instead of going to the parade.
It isn't that Hector doesn't like the parade, which he describes as the coming together of Puerto Ricans to exhibit their pride, culture, progress, sense of belonging to one another and sharing of common affinity with a wave of the Puerto Rican's flag. For the Puerto Ricans, it is a day of celebration.
Almost all Puerto Ricans agree that the roll call at the parade will be a line up of stars and politicians, and that Puerto Ricans love the enchantment, which they say the annual parade affords them to show off their pride, culture and beauty as parts of their nature.
The parade holds dozen of events, but with only seven vividly portrayed aside from the fair that holds a day before the parade. Like any other parade by other peoples in the city who also hold parade, it is a time to thank God for harvest and all that God had done to spare their lives in a world that is filled with more evil than good.
Apart from the March past that will be graced with the Puerto Rican's flag, it is an event that is filled with entertainment galore. Ladies will appear in their best bikinis showing off the beauty of their anatomy and shaking the best part of their bodies and the boobs to the rhythm of the best music available.
As you are reading this, the Fifth Avenue is already under the influence of the parade with road blocks, police manning the streets for security, men, women and children filing out to show the world their humanity and history.
The human appearance and experience is an embodiment of a people's history. It is why today and every second Sunday of June, the Puerto Ricans file out in New York and wherever they are in the US to let the world know who they are as part of the United States, though not yet a state under the US, but a 2012 referendum has made the door open for them to choose either to be a state or not under the US.
Puerto Ricans has a larger than life presence in the US and their votes count and one of the reasons today's parade like the ones before it has always been of great importance to politicians of all shades to show support and indirectly canvass for support.
The relationship between the US and Puerto Ricans began when the island was ceded to the US as a result of the Spanish-American war. The people were granted American citizenship in 1917 and they have popularly elected their own governors since 1948.
Puerto Ricans enacted their own constitution in 1952, and the people resolved in a plebiscite each in 1967, 1993 and 1998 not to alter their existing political status with the US until the 2012 vote. They are closer today with the possibility of statehood under the US than they have ever been.
When you meet a Puerto Rican and you mistakenly ask whether he or she is from the Dominican Republic or any of the other Spanish speaking people in the Caribbean, he or she will gladly tell you "I am from Puerto Rico".
Of course, Spanish is not the only language spoken in Puerto Rico. According to the CIA, English and Spanish are the two dominant languages in the Island and the people comprise 78.5 white people, 12.4 percent black African Americans and 99 percent Latino.
NEWS AND FEATURES
News & Features Around The World