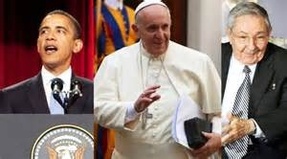 Barack Obama, Pope Francis and Raul Castro
The world is agog with a new turn in the relationship between the United States and Cuba, after.fifty years of enmity. The one major question on everyone's lip is whether communism has ended in Cuba and the country is ready to embrace democracy. Some have been quick to liken the development Between the U.S and Cuba with philosophers' teaching that says 'nothing is permanent, and everything is constantly in motion.'
Some observers see the question about the difference in democracy and communism as very important in determining how the  relationship between the two countries will be like, when it is eventually fully restored.
Meanwhile, Senator Mark Rubio, Miami(R- Fl) born son of Cuban immigrants, has threatened to block financing for the building of a U. S embassy in Havana. He is not alone. Senator Bob Menendez (D - N.J) commended the release of one of the prisoners, but he criticized the prize. And the prize is that there is no assurance that Cuba will embrace freedom for its people.
Majority of people who have hailed the possible restoration of relationship between the two countries say that Americans will be free to travel to Cuba and Cubans will be free to come to the U.S. Others say the Cuba's economy that has been in the doldrums will get a face-lift, as money from the U.S will believably find ways to a place once regarded by the U.S an island unto itself.
Curious observers say what all these means is that being communists will no longer stand in the way of people from communists countries from free entry into the U.S. Ideally, many people remember a form travelers fill in the aircraft answering questions whether thy are communists or not, and that on one coming to the U.S could say he or she is a communist, aware that the U.S does not condone communism or allow communists entry into the country.
Many Cubans are still skeptical about the new development amid uncertainty if Cuba will allow freedom in place of communism. Some of the Cubans say they dream of a free Cuba, and that they are looking forward to a free Cuba.
NEWS AND FEATURES
News & Features Around The World