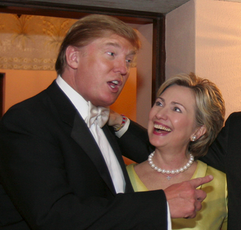 It is authoritative that the hill is on rhetorical fire. The latest raging fire is between the Republican front runner, Donald Trump and his Democratic party counterpart, Hillary Clinton, outside the fire that has existed between Trump and other presidential candidates on the Republican Party's platform.
The two political combatants are proving that politics is nothing short of the mud game. Trump seems to be surviving the mud game in his own party targeted against his own character, because according to observers, he says things unguarded and with no bare hold, in ways Americans have never witnessed in recent times.
Clinton seized upon the trending in the blogosphere and slammed Trump as being helpful to the ISIS recruitment, saying that the ISIS was using Trump's video for recruitment. And her choice of Democratic Party's presidential candidates' debate as the base for her criticism of Trump made it big.
"The ISIS is using the Trump's video to recruit," she said rhetorically at the party's debate, where she was faced with two of her opponents. But Trump, who watched the Democratic Party's debate like many other Americans, said that Hillary had lied against him.
In his response, Trump said that Hillary is a liar and he demanded an apology. But Hillary has doubled down on her statement about Trump and the ISIS. She is insisting that there are videos of Trump being used by various Arab television stations showing Trump's statement asking the US to ban Moslems from coming into the US.
Political commentators have waded into the fire. They are saying that there is nothing to verify the existence of any Trump video being used by the ISIS for recruitment. Many observers are saying that the real political campaign between Clinton and Trump has started. And the question on political observers' lips is about who will be the next president of the US between the two combatants, though none of them have been nominated to represent their respective party.
The debate is dovetailing into who is a new face and who is the establishment figure. Or put the other way - who is the Washington insider and who is the outsider. But the problem for now is that the two combatants are still busy working toward clinching their party's nomination. Many people are saying that Clinton is certain to emerge as her party's candidate, but that Trump is not so sure yet.They are saying that Clinton has played into Trump's hands, and that Trump will use her to position himself as his own party's likely nominee, by going on the attack to maintain the momentum that he has already established.
Many people are talking about how candidate Barack Obama emerged, used his oratory power and he defeated Clinton in 2008. The next line of discussion that follows is the emergence of Trump, whose momentum, people say, has shown promises of capability of making things difficult for Clinton in her second effort for the White House. Another issue in the discussions is whether Clinton will go the way of Jeb Bush in the fight against Trump. They are saying that both Bush and Clinton belong to the dynasties; they are saying that Bush has been judgmental of Trump and that Clinton has begun to be judgmental of Trump too. And that despite his judging Trump harshly, Bush is still behind in polls. They ask whether Trump will also humble Clinton the same way that he has humbled Bush. But some people think it is the political reality and Americans' disapproval of political dynasties that is Bush's undoing.
One of the many unanswered questions is whether the next general elections in the US will be between a new face and the dynasties. Bush and Clinton obviously belong to the dynasties. Bush is down, but Clinton is still standing.
NEWS AND FEATURES
News & Features Around The World