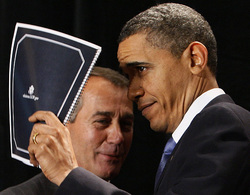 After 16 days in the limbo, the United States Government has reopened its doors for business again. The good tiding follows a senate last minute deal to raise the debt ceiling along other spending arrangements without defunding Obamacare.
Many workers who have been furloughed will return to work and the fear of the country defaulting is temporarily assuaged. But the struggle between the Republican Party and the Democratic Party is not over, since the latest senate deal is only meant to ensure the government avoids default and its dangers.
However, President Barack Obama said in a New York Times report, “I’ve got some thoughts about how we can move forward in the remainder of the year and stay focused on the job at hand,”
"Have they resolved the problem in the government," a building super like other millions of Americans who knew little or nothing about developments asked. When he hears that the Congress has passed a bill to raise the debt ceiling and reopen the government, he says they don't need to borrow.
Some are already claiming victory and others saying they got little in return for their efforts. But Senator Harry Reid in a statement thanked the Republican leaders in the Congress for their cooperation that ensured the breakthrough.
NEWS AND FEATURES
News & Features Around The World