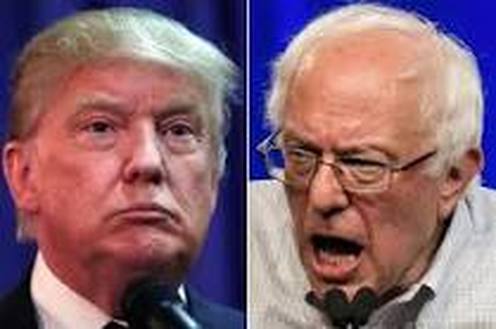 Trump and Sanders (Courtesy: jgaciti2013.wordpress.com)
Bernie Sanders and Hillary Clinton, the two Democratic Party candidates in the battle for the White House are making desperate efforts to get the attention of voters in early battle states of Iowa and New Hampshire. The same is applicable to Donald Trump and Ted Cruz, the front runner and the opposing candidate in the Republican Party.
The poll results for all these candidates in the early battleground states are dead heat. Although Clinton is still leading Sanders in Iowa with a hair tread, Sanders is leading her with a wide margin in New Hampshire. And so also is the case between Trump and Cruz in Iowa and New Hampshire, where Cruz is leading with a hair thread in Iowa and Trump leading with a wide margin in New Hampshire.
Some polls say that Trump has caught up with Cruz in Iowa following Sarah Palin and the Iowa State governor's endorsement of Trump there. The development has led to volleys of adverts from both contenders jostling for last attention before caucuses that will be held few days away. The issue in both party's candidates' contention as they seek voters' attention is about who among therm are establishment candidates and who are not.
Sanders is running as an outsider and unattached to the Democratic Party's establishment, while Clinton has settled down as an establishment candidate, and she is  endorsing  President Barack Obama's achievement to convince voters to retain the president's achievements against Sanders, who she says wants to start afresh all over again. And Sanders has closed up on Clinton in the polls, nationally and in the early battleground states, using messages about reducing the burden of college education loans, make college affordable and make life more meaningful for the poor. Sanders message has reportedly become more appealing  to college going people and the poor.People say that Sanders' closing up on Clinton in the polls is one worry among others that have  made both Bill Clinton and his daughter, Chelsea, join Hillary on the campaign stump. But the presence of the entire Clinton family has not stopped Sanders from advancing forward in the polls.
And in the case of the Republican party, the confusion that has greeted Trump's emergence as a front runner in the polls among the many contenders in the party has continued. Cruz, who earlier has appeared to be the favorite of the Republican Party and the Conservatives and the conservatives', is telling Americans that Trump has become the establishment's candidate, because according to him, the party seems to be changing its position on Trump as a front runner to be supported in abandonment of Marco Rubio, whom he said has been earlier favored by the Conservatives, and that he (Cruz) is the outsider that the establishment doesn't want.
The liberal media is touting Cruz in favor of Trump. Many people see the latest Cruz effort against Trump as too late and many of his messages confusing, especially claiming to be an outsider in Washington, where he has been a senator for sometime and saying that Trump is the new establishment candidate , when Americans know that Trump is the outsider and that it is the reason for his massive support from people who wants an outsider and not anyone who has been part of Washington's political melodrama to be the next president of the U.S.
Cruz is trying to present Trump as a deal maker who will make deal against America's interests, but Trump has not said that he is not a deal maker, but affirms that he is a deal make and that he intends to make deals to unite Americans of varying political and cultural background, and that he would do anything desirable to keep Americans safe. However, reports show that his earlier unguarded statements are still hurting his acceptability in the polls, which will require a blockbuster of Public Relation works to turn around. Observers said that Trump seems to have begun the turn around work within his own party and among the Conservative members, and that the party seems to be leaning toward him as the front runner, helpless because Trumps appears the man to beat.
Giving the news that is making its round about the ongoing investigations into Clinton's use of private server as a secretary of state and the likelihood that something unpleasant may happen that will give Sanders the edge over her, many people are already putting Sanders and Trump as likely candidates for the general election, and that unless Cruz or Rubio got a miracle against Trump, the next American president will be well over 70 years, since Sanders and Trump have already achieved the age of 70 or closer to it. Even if Clinton prevails against Sanders, she is also seen as way up in age..
NEWS AND FEATURES
News & Features Around The World