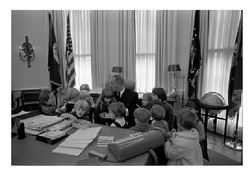 Johnson with children in the White House
Today is Presidents' Day in the United States, reportedly the beginning of 50 years' commemoration of Lyndon B. Johnson's presidency. It is believed that the negative act of the Vietnam war has marred what would have been  Johnson's shinning legacy.
The question being asked today is whether the Vietnam war be allowed to blur this shinning legacy of opening the door of education to the poor and lessening the burden of poverty. His presidency was responsible for the welfare and education aid programs instituted in the country in the 1960s.
Johnson's had been reported as having said the reason for instituting the education aid was that as a school principal, most of his students lacked the means for fees. Therefore, when he became an elected official, education aid became a priority in his mind.
The opportunity came with John F. Kennedy's assassination, while he was a vice-president. When he became president, education aid and other welfare programs came into being. The irrepressible civil rights campaign led by Reverend Martin Luther King at the time may have influenced government's decision. But it was clear that a man was at the helm who favored the social reforms sought by the people.
NEWS AND FEATURES
Photo used under Creative Commons from Children's Bureau Centennial
News & Features Around The World