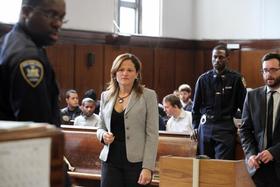 Viverito (middle)
Melissa Mark-Viverito, East Harlem Council woman in the New York City Council was today elected the council's new speaker. She succeeds Speaker Christie Quinn.
Her election follows a hard fought campaign in which Mayor Bill de Blasio is reported to have played a prominent role to give her a hand up, by working the phone asking council members for support and votes for her. However, the mayor says despite his role in her campaign, the new speaker will be allowed to do her work without influencing her decisions.
Mark-Viverito, a native of Puerto-Rico is the first Spanish member of the council to be elected speaker.
In her speech after the election, she promised to work toward raising the minimum wage in favor of fast-food workers and others in the bottom of the income ladder.
NEWS AND FEATURES
News & Features Around The World