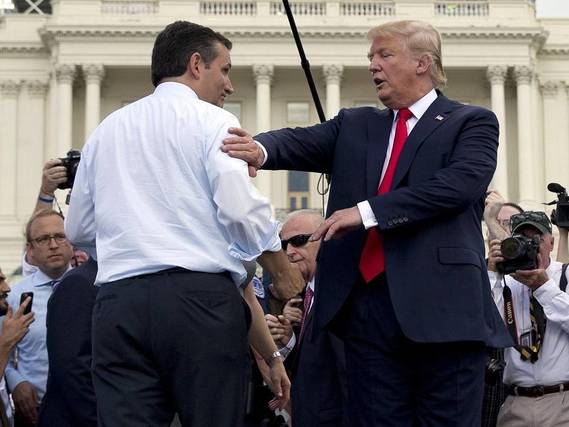 Cruz with Trump
Although, the poll results show that Donald Trump will come top from today's primary election in Indiana State and Ted Cruz has said he will perform a miracle against expectations, observers are still waiting to hear the official election results. It is a long wait as the result may not start coming until about 20:00 hours. However, news reports just out says Trump has won Indiana.
However, news reports from Indiana shows that Ted Cruz Cruz campaign is getting ready for the worst, much against what the senior officials and the candidate have said concerning their expectations. One of the decisions reports said the campaign has taken is the possibility of trimming its staff as the candidate continues his struggle to other states after Indiana, the IndyStar reported.
Donald trump is reported to be expecting a landslide victory. Observers doubt if there would be a landslide. The most that genuine Trump supporters expect is a win over Cruz and the party's establishment. Reports have indicated that whether a slim win or landslide, whoever wins will get all the 57 delegates.
Therefore, landslide or slim win don't matter here. What matters is win and win clearly. Cruz wins, it will be a victory against trump and media, because he has accused the media of supporting Trump and he said that media reports following Trumps victory in new York, Maryland, Rhodes Island and Delaware was aimed at putting Trump over the top. After today, it will be left to be seen whether it is the media or the electorates that has put Trump over the top.
Observers believe that Cruz has manifestly created the battle of a titan for himself by his decision to follow the path earlier walked by Marco Rubio, believing that the party's establishment will decide the elections and not the electorate. From the beginning, Cruz was careful not to attack Trump. When a section of the media asked questions about why he kept a distance from attacking Trump, he said he intended to play it cool so that he could gain Trump supporters, if Trump loses out in the race.
The game changed along the way, when Rubio and Cruz were seen on a debate stand ganging up against Trump. It was the beginning of a show being managed by the establishment from behind. The beginning of the end for Rubio, and the beginning of Cruz turning around to embrace those he said he had never shared the same political beliefs, even though they are all conservatives. It was the beginning of a new song that they are all Conservatives and that only Trump is not a Conservative.
Eventually, Cruz got swallowed whole by the establishment. He gave the establishment his heart. all the donors who had earlier supported the failed campaigns of Jeb Bush and later supported the failed campaign of Marco Rubio switched to Cruz. And Cruz chose the donors against the electorate. He went wholesale embracing those he had called Washington politicians he said he never agreed  with. He is with the donors with one part of his heart and with the electorate with one half. A case of serving two masters. Would any true Conservative do that?
Embracing and approving the story of Esau, who gave his birthright to Jacob following a famished hunger. Esau never recover his loss to Jacob. It is doubtful whether or not Cruz will recover the support of the electorate that he had lost following his decision to dine with the establishment.
NEWS AND FEATURES
News & Features Around The World