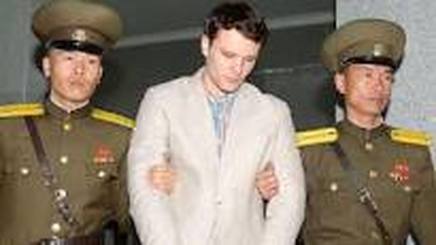 Otto Warmbier, in the hands of his captors
It was late on Monday, when the news of the death of Otto Warmbier, the United States' North Korea returnee came in the news. The information was shocking, as confirmation of the revelation of the medical team, that treated Warmbier at University of Cincinnati, that said Warmbier had suffered serious neurological damage.
Many Americans expected Warmbier to survive, despite the revelation of the serious neurological damage Warmbier was announced to have suffered from North Korea. The unexpected announcement of his passage made the Monday night suddenly became silent.
What is happening? What did North Korea did to Warmbier? North Korea said that Warmbier went into coma after he contracted Botulism. But the doctors in Cincinnati said that Warmbier extensive loss of brain tissue and was in a state of unresponsive wakefulness. North had said it was releasing Warmbier on humanitarian grounds.
North Korea apparently released North Warmbier to safe face and not allow him die in their custody. Whether by releasing Warmbier to go and die in the United States, North Korea has achieved the objective of covering up its inhuman treatment of Warmbier in its custody is not certain, because Warmbier's death has exposed the evil that North Korea represents, and it has since Monday night becomes the talk of the town.
The news must have reached Jong un that the U.S. student who was detained in his country and released to go and die in the U.S. had died. Jong un must be thinking if there will be any repercussion to his country's handling of Warmbier's case. Jong un must know that no one takes another life will live without paying the price for murder.
Saddam Hussein killed many of his own country men and women. When the time of judgment came, he did not escape it. Muamar Gadaffi Libya downed an aircraft that killed many people, which case took several years. When the day of judgment came, Gadaffi ran like a common criminal on the street, and hid in a culvert, while he sought safety from the bombardment of fire power against his life.
In Nigeria, it is said in Yoruba language that everyday belongs to the thief, but one day to the owner of the property that the thief has recklessly stolen on daily basis. Aside for the unheard deaths that Jong un may have visited on many others before Warmbier's case came into the open, history tells us that no one has taken another life and go without paying the price with his or her own life.
Beginning with the Cain And Abel's story in the Christian scripture. In that story, the voice of God was heard asking Cain, where was his brother, and he asked God instead whether he was his brother's keeper. But the curse followed nonetheless. The U.S. has, the has asked North Korea about Warmbier's heath, and North Korea has said that Warmbier fell into coma about one year ago after contracting what North Korea knows as a lie to cover up its crime.
​   Undoubtedly, Jong un's North Korea's lies will one day find him out in his hiding place and will overtake him, because he will not be here to explain the reason for his foolishness and murderous attitude. He will not be saved by his arsenal of bombs.