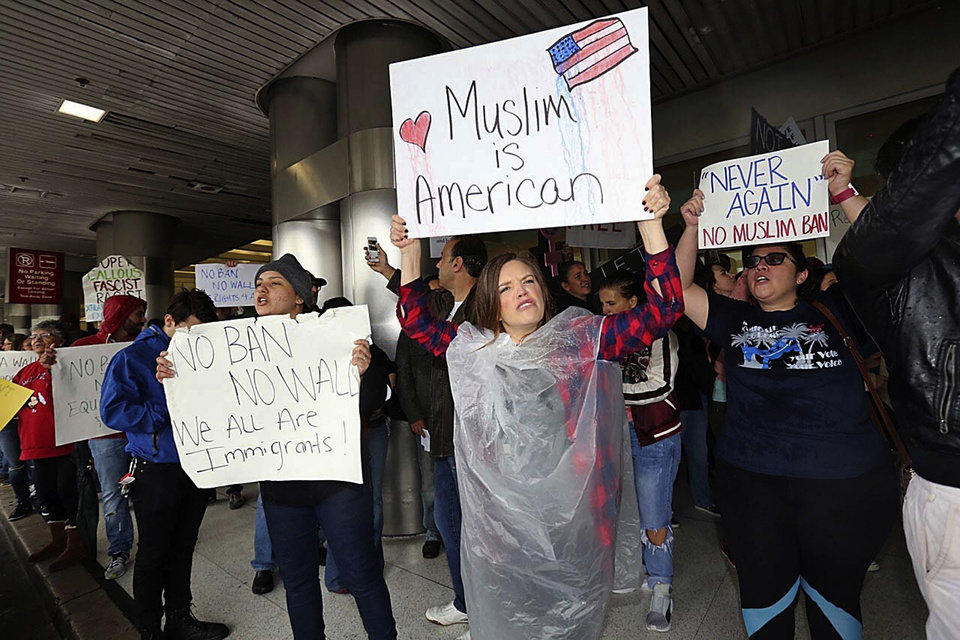 Some of the protesters and demonstrators at one of the airports on Sunday
The dust has not fully settled from the weekend scene of confusion and chaos at the airports around the country. Though, news reports said on Monday morning, that all the travelers from countries affected by the new executive order on immigration had been processed overnight, and that only two fellows were deported.
No one will say that he or she did not feel the pangs from news reports about protests and demonstrations at the airports, arguments and counter arguments by opponents of the new immigration ban and government representatives.
It is one weekend that only man, the president of the United States, with a stroke of the pen, causes what has become known as weekend that Trump shakes the world, with travelers from affected countries stranded and disallowed entry into the United States on arrival, notwithstanding whether they are documented or undocumented.
Americans woke from sleep on sunday and learnt that travelers from seven Muslim nations had been disallowed entry into the country, based on provisions of a new executive order on immigration. The news reports were not just about the stranded passengers, it also showed the protester and demonstrators, who had occupied every space at various airports around the country, shouting singing, and describing the new immigration order as unconstitutional and UnAmerican.
The lines in the news were that Trump had signed a new order on immigration, several nationals of affected countries were stranded at the airport and held at the Immigration detention centers. The highlight of the reports was about a ruling by a court in Brooklyn that ordered that the affected individuals could not be deported as demanded by provisions of the immigration ban order and tha meant scaling back part of the immigration order, and showed a conflict between the executive and the judiciary.
The executive order was signed on friday and it took immediate effect. Causing airlines to turn passengers back at the airport in affected countries, and passengers who had boarded their flights before the airlines began their compliance with the new order arrived the U.S. and learned that they could not be permitted entry and were not allowed to use their phones to make contact. The fear that they could be deported was real.
What confounded the situation was the uncertainty about who could be affected by the ban. Were the Green Card holders affected as well as refugee and valid visa holders? It was where the court ruling became relevant for its wordings that whoever had valid visas and refugee status could not be deported. It later became clear that no one knew but the government, who could be allowed in and who could be denied entry.
In the middle of the confusion, government issued a statement that Green Card holders were not affected by the ban and that they were free to roam. News reports termed the statement to mean that the government had rolled back part of the provisions of the ban order. By now, government opponents began to accuse the government of targeting the Muslims in its ban order. Government pushed back on the accusation, saying that the ban is to keep the country safe and to ensure bad guys don't come into the country.
Trump supporters said they were shocked at the surprise and shock expressed by his opponents for his fulfilment of a campaign promise to begin a screening of migrants from Muslim countries to keep Americans' safe.
When administration personnel say that the ban was not target at Muslims, showing other Muslim countries untouched by the ban, opponents say that there must a pecuniary reason for the ban of some Muslim countries and others left untouched. The government then say that the first step is a temporary ban to be renewed after the expiration, and that some countries not their now may be included later, while some who are there now may be excluded after a review.
On why the government did not give a window of about a week to allow government departments and airlines time to get grasp of the provisions of the new ban order, government said that bad guys could use the opportunity of such a window to get in before the order's effectiveness.
Meanwhile, there are expectations in liberal politicians' circles that there may be litigations to challenge the constitutionality of the ban order. To drive the point home, the Washington State attorney general, Bob Ferguson, said he had filed a suit to the effect, citing how the ban is capable of affecting business in Washington State. Reports say that the British parliament is debating possibility of banning Trump from Britain, as spill of his ban of Muslims. Observers say that will be interference in the U.S. internal affairs, and that Trump has not said his ban is targeted against Muslims, no matter the inferences being made.
Reports show how protesters and demonstrators took so much space at the airports, enough to obstruct people going to take flights. But despite the so much noise, chaos and confusion at the airports on Saturday through to Sunday, everything seemed to be quiet on Monday, as if there were no public agitations at the weekend. Trump had said his order did not cause the chaos and confusion, but the protesters and demonstrators did. And protesters said they would not stop until they get the ban upturned, against government's decision.
For now, government is defiant and protesters too are defiant. Some Republican law makers seem to be on the side of protesters, but as much to say that the ban is unconstitutional or UnAmerican or targeted against Muslims, but that it will send a wrong signal to enemies and terrorists may use it as platform for recruitment. it is possibly for government to convince the lawmakers to its side.