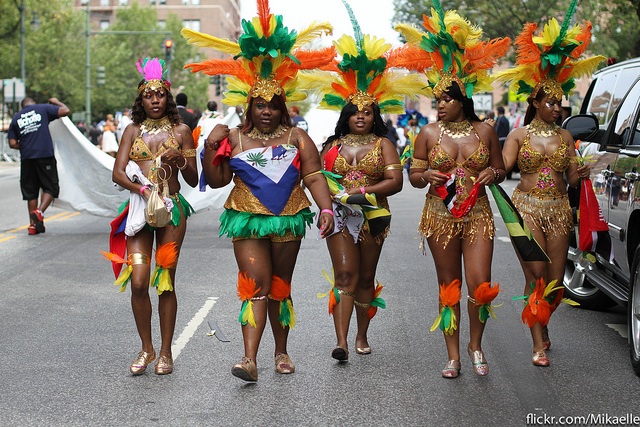 September 1 is usually a different day in Brooklyn, New York City. Yes, it is the labour day and a public holiday. Unlike other days and public holidays, it is a day that Carribeans host the Labor Day Parade called the West Indians Parade.
They say it is the only day set aside to get together out of 365 days in a year,  and remaining days devoted to work.  The weekend before today had been filled with merriment and parties.
Early in the morning, party goers are seen returning, dressed in deliberately made to look dirty shorts and tops; body scrubbed in colors and a backpack in place on the back, signifying dressing and color of labor. It is an annual celebration heralded with nights of partying.
Streets are filled from all areas of Brooklyn with people marching toward the Eastern Parkway in Crown Heights, singing and dancing with national flags and colors of countries from the Caribbean Island as scarfs and bandanas. Nationals from Jamaica, Guyana, Grenada, Trinidad and Tobago, Barbados, St. Lucia, Haiti, St. Vincent and other countries from the island are all represented and mostly in costumes distinguishing them.
Police are all over the place  from early morning, continuing a vigil that  has started on Friday with surveillance cameras in vantage positions, and not hidden from the public. Police lieutenants hardly seen in the public are all over, and police cars are moving around with overhead lights and sirens. The police usually call the celebration to a close at the Eastern Parkway toward evening, and partying continues in the neighborhood through the night. Only one person was reported killed early on Monday morning near the parade ground.
NEWS AND FEATURES
News & Features Around The World