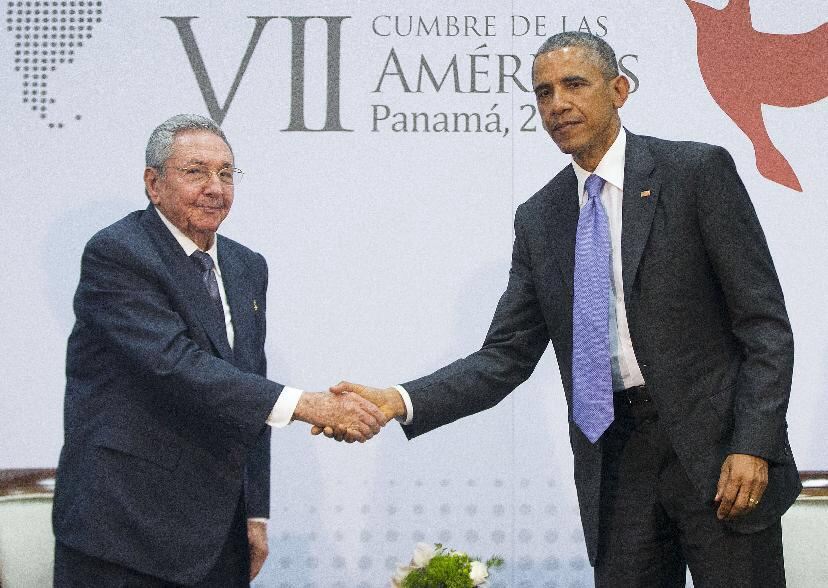 Raul Castro and Barack Obama shake hands (Courtesy: news.yahoo.com)
They met in Panama and shook hands and the news went viral. This is a reference to the meeting and shaking of hands between the President Barack Obama of the United States and Cuba's strongman, Raul Castro. Some people have rightly or wrongly described the meeting and shaking of hands as between capitalism and socialism.  Keen observers have said those who see the handshakes as between capitalism and socialism cannot be far from the truth, because they said Obama represents the world's number one capitalist country, and Castro as the learn of the world's unrepentant socialist country.
Although, the news following the meeting and shaking of hands between Obama and Raul said the meeting in Panama will pave  ways for further agenda in the offing between the US and Cuba, no one seems to be asking questions about the direction of the newfound love between these two strange bedfellows and how it will augur for humanity.
People have said there is nothing strange for people to disagree and to later agree. However, people have said that in agreeing again, there are fundamental issues that must be addressed about who would submit to the other. Who would give up his or her avowed ways of life to make the new relationship work? The question is described by observers as relevant who have viewed the reason behind the earlier disagreement between the US and Cuba as having underline fundamental reasons that cannot be glossed over.
The immediate question is: Who,is in need of who now after 50 years of estrangement?and what was the cause of the estrangement? Has the cause of the estrangement been removed?
Some people have said the cause of the estrangement is because of the difference in the economic formulae either country has chosen to embrace. The US is a world core capitalist country, while Cuba is an unrepentant socialist country and democracy as a political idea don't appeal to Cuba. If democracy is to be followed, Raul would not have succeeded his brother, Fidel Castro, as Cuba's president. The country has said it wants the US to respect its choice of way of life. Cuba has not changed from its position.
The news of the new forging of relationship between the US and Cuba has been greeted in political circles with fervency and lukewarm, depending on where one belongs in the political divide between the Democrats and the Republicans. Shockingly, some Democrats have also been wary about the newness in the affairs between the US and Cuba. Some US lawmakers who have linked to Cuba have asked for carefulness on the part of the US in dealing with Cuba. They said that there is nothing to show that Cuban leaders have changed or that they are ready to change to embrace democracy. News reports said that the country is still in a state of clampdown on freedom. Keen observers have said if the US is talking to Cuba on a need for a relationship, the US may as well be ready to start talking to other socialist countries in the same hemisphere with Cuba and others elsewhere.
It is here that the picture of Obama as the president of the US comes in. He has been accused by his destructors as pacifying the US enemies. It is said that the world should not be surprised if the the US is heard of going on a round table with the North Korean regime. They point to what is happening between the US and the Iran mullahs as a good example. Recent outbursts of an Ayatollah Khameini that the US or the world should not contemplate access to Iran military barracks over discussions on Iran's nuclear talks as yet a good example of the diplomacy between the western countries and others the West is trying to bring to submission.
President Obama apologists have said the president should not be blamed for engaging countries perceived as enemies of the US, until the outcome of such engagement. They say it is possible for such engagement to end in favor of the US, and bet that the president would not sacrifice the US's interest.
Others have said that if the president sacrifices the US's interest in any of the engagements, his party will pay for it in the elections. And this is sighted as one of the reasons some Democrats are wary about the current handshake between capitalism and socialism and would not sing or dance to the tune.
NEWS AND FEATURES
News & Features Around The World