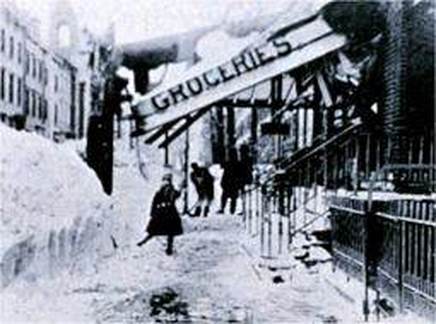 Photo of a blizzard in New York City in 1888 (Courtesy: BlizzardPhotoGallery)
The talk about the snow blizzard and its inconveniences are all the over city. The announcement is on the airwaves and the newspapers. Adults are talking about it. School children seem to like it. They are saying the schools will close, and and  see it as an opportunity for relaxation. They are almost turning it into a song, song about a snow blizzard and the love of seeing the school gates shut.
The snow blizzard, if it comes the ways it has been forecasted, will make the streets messy on Tuesday morning, in the North East of the United States. It will be rough and possibly see people stranded at work in the morning hours and those at home stall indoor and may be unable to go to work.
The blizzard has not come, but people are already talking about its likely effects. "The weather will be colder toward tonight, going into Tuesday," one construction worker, who had told this reporter few days ago that the weather was turning unbearably cold, said.  Another construction worker, who said he usually hits the streets early in the morning says, "I don't think I will be working on Tuesday morning. Unless the weather does not become messy as being predicted."
Security companies, which operation falls under emergency services, are already giving notices to their workers that no calling out on Tuesday! Some security officers interviewed said their coming to work on Tuesday, especially in the morning hours will depend on several factors, chief among them are availability train service cab operation. It will mean that the road is motorable and the New York City does not shut down the rail service. The same will depend on people coming from New Jersey to New York, who expect the Path Train to remain in service, and that without the train, it will an expectation of miracle to get to work.
Ordinarily, for many New Yorkers, who have grown accustomed to visitation of snow blizzard, wading through accumulation of ice to access the train station from their homes does not pose any problem. The problem arises, when there is no train service or the streets become clogged, and car owners are unable to do pool ride to help others out - to work. Someone hinted to this reporter that there have been cancelation and rescheduling of events for Tuesday and Wednesday at his place of work.
As at the time of writing this report, there has been no word from the New York City council about whether the train will run or not. Normally, the council follows the severity of the weather condition to determine the running of the train or canceling the service in a messy snowing weather. They watch the weather and see the condition is deplorable and capable of injuring people going on the street to decide whether to tamper with the train service, as part of strategy to keep people away from the street.
Else, the drive to make money to pay rent and other bills, and meet other family needs always determine individual's decision at bracing any condition to be on the street, notwithstanding whether it is raining water or fire. The first object of attention as the weather condition is on everyone's radar are the homeless people. The city is known to do everything at its disposal to get them off the street, because they are known to be vulnerable, when the weather turns into a killer.
"Well, no one knows tomorrow", a young lady working with a cleaning company, said. "We may wake up tomorrow to a fine and beautiful weather, amid deluge of scary statements around her about tomorrow's blizzard.