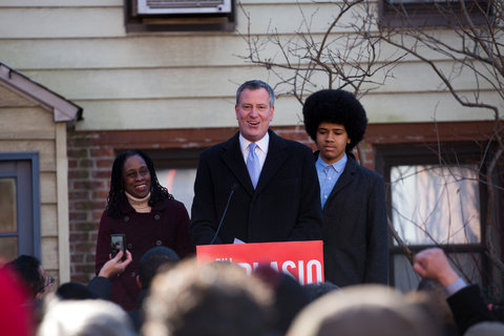 De Blasio, his wife and one of his children
You are in a train station and your two ears are blocked with your music set ear phones. You think you are enjoying a beautiful song at its loudest. Suddenly, two trains arrive in the station same moment and the noise from the trains overwhelmed the one from your music. The music becomes blurred until the you sit in a car in one of the trains and you begin to hear the music returning to you. You start to distinguish noise from music, and you realize that noise is a distraction.
New Yorkers are the polls to choose from a long list of men and women seeking public office or choosing to move from one public office to another. Some have been in public office before, but want to return to offer a better service, irrespective of what may have compelled their departure in the first place.
From the Democratic side, Christy Quinn has been deputy mayor and she want to be mayor. Bill Thompson had been in public office, he left to work in a bank and he is returning to want to be mayor. Bill de Blasio is the city's public advocate who wants to be mayor. John Liu is the city's comptroller who wants to be mayor, and  Anthony Weiner, former member of the House of Representative suddenly realizes he can become mayor as a show of remorse for a past mistake.
From the Republican side comes Joe Lhota, a former aide to Mayor Gulianao and who has run the city's metropolitan train service. John Castimatidis, a business man and in term of net worth, an equivalent of Mayor Michael Bloomberg. The last and not least is George Macdonald who also wants to be mayor. Why do all these people want to be mayor? The answer emerges morning before the election at David Letterman's late night show: Raph Emmanuel, the Mayor of Chicago, says to be mayor is the greatest job that exists.
Out of this 8 personalities, only one will emerge as mayor. From today's election, one candidate each will emerge for Democratic Party and the Republican Party, to slug it out in November for the mayoral election proper.
At the beginning, a whole lot of attention was given to the Democratic Party candidates and people hardly knew there were Republican candidates.
At the beginning, Quinn and Weiner led the pack of the Democratic Party candidates. Weiner dropped down for sexting, the same problem that yanked him away from the House of Representative. Quinn belongs to the establishment and can hardly give a robust challenge to where she belongs. Thompson is struggling to make his point and those who know him say he almost defeated Bloomberg in the last mayoral election, and they are wondering what has happened that he is stuck in almost same position in the polls. John Liu is said to be good, but news of the past is said to be hurting him.
Imagine listening to these 8 contenders and try to make meaning from their speech. Difficult. But De Blasio is one guy in the pack of the Democratic Party saying what people people want to hear; something like Bloomberg has given much attention to the Wall Street and it is time to give attention to the ordinary people. And he is resonating with the people, and one of the reasons he is leading in the polls among his peers. Another reason he is leading is the beauty of his family that has brought family value to the center stage in the campaign.
Catsimatidis is seen like a Bloomberg and that is an easiest way to lose a race. It is why Lhota has put him and Macdonald behind in the Republican Party. If the polls are anything to consider, De Blasio and Lhota may emerge to slug it out in November on who to be next New York's mayor. It is the meaning one is able to make from the mayoral race noise, and other noises like the Syrian debacle; the threat of military intervention and John Kerry's 7 days ultimatum for Bashir al-Assad to surrender his chemical weapons.
The Syrian military intervention becomes so big in noise that people listen to whether the country is going to war again, and that makes the mayoral race pales into a sort of insignificance.
Widget is loading comments...
NEWS AND FEATURES
News & Features Around The World