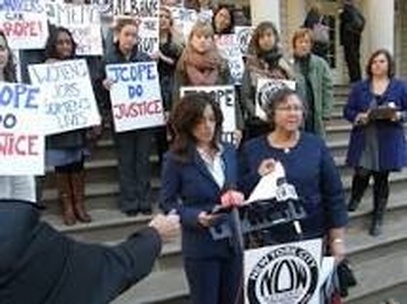 National Women Organization, New York led by Ossorio
New York's women, last Thursday expressed dismay over the increase in cases of violence against women, at a rally in the city hall. The women say debarring women below 21 years from internship and employment, which they say arises from investigations into Assemblyman Vito Lopez's harassment case, is outrageous and discriminatory. They frown and say, "any violence against women is unacceptable, where ever it takes place; in a private home, in an office or public office. " They demand full hearing of the facts in Lopez's harassment case.
Led by the president of the National Women Organization  New York, Sonia Ossorio, they carried placards that read 'Albany Stop The Cover Up' 'Lawmakers Can Rope' 'Jscope Do Justice' and 'Women's Jobs, Women's Lives.'
"The women of New York are today on the steps of the city hall to say we cannot tolerate sexual harassment in any work place, but especially by lawmakers who are the people we elect to make laws, to make work places more equitable." Ossorio said. "Women in the city will no longer accept apologies from Albany. The sexual harassment policy should punish the perpetrators and not haunt the victims."
According to Ossorio, New York women want the investigation against Lopez to be broad in scope. She said women are against two rules; one for the powerful and one for everybody else. She asked,"If a lawmaker harasses an intern of 21 years old, should the case be stoppage of hiring interns and employment of women below 21 years?"
Susan Lerner of New York Common Cause said women want thorough investigations and urges the assembly not to leave the public in the dark, and leave no question unanswered. She said the harassment case began with Assemblyman Lopez but said the case is broader than that, and that good government and accountability requires investigation into all questions and not just some of the questions.
Concerning assault and women's safety, Ossorio said, " New York City is the safest city in the world. However there are still a lot of assaults that take place. We work closely with the district attorney's office to make sure they give priority to investigating complaints and they indict perpetrators and take them off the street. But that doesn't always happen. Historically, the criminal justice has had a problem making this a priority, but we see a lot of good things from the local DAs."
Ossorio admits that homeless situation comes into focus when recent cases of rapes are considered, but emphasizes majority of rapes happen to women by people who they know. She noted rapists tend to be repeat offenders. She doesn't think lack of punishment causes repeat offense. She mentioned a case of a police officer who raped a woman and got 75 years and said that was more than most murderers got. The penalty, she says, is in place, but there is a need to indict perpetrators. She agrees the number of rapes may be up and say women have to be smart to be safe.
One woman who had been a victim of assault said, "I was hit once, and had a bulging right eye that took me out of work for weeks. One has to be smart and be ready to protect oneself, because the environment isn't perfectly safe."
Natasha Adams of Girls For Gender Equities said the harassment by the Assemblyman was a betrayal, and that the environment is no longer safe for young women, unless the assembly is rid of sexism and sexual violence. "Not to do so will be complicity in perpetuation of violence against women."
NEWS AND FEATURES
News & Features Around The World