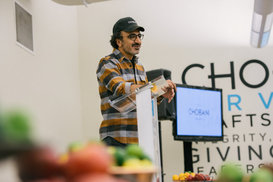 Mr. Hamdi Ulukaya (Courtesy: Nytimes.com)
Imagine yourself as an employee of a company, whose owner walks and suddenly tel;ls you and other workers that he is giving you shares in the company and with enough percentage capable to make you millionaire along with your other co-workers? Won't that be the happiest or one of the happiest days in your life?
It is the lot that has befallen employees of Chobani, a Yogurt producing company, whose owner - Hamdi Ulukaya - announced a plan on Tuesday, to give the workers about 10 percent shares each, when the company goes public or it is sold.
According to the New York Times that reports the news and headlines it Windfall for Chobani Employees: Stakes in the Company , Ulukaya said it is to ensure they have share from the wealth they have helped made since the company began business in 2005. Some observers say that if this comes true, it will be like winning the lottery for the workers and that the difference will that they have worked hard to earn their shares.
Another rare attribute is of appreciation and kindness demonstrated is that by Ulukaya. Many people say that it is rare to come across employers of labor to suddenly consider making millionaires and be on almost the same level as co-owners. A large number of people in discussions about Ulukaya's kind gesture to workers at Chobani said Ulukaya is the kind of employer they pray to have as their employer.
Many people talk about luck shinning on the workers at Chobani, who when hired to work at Chobani hardly knew they would one day become shareholders and be millionaires. Unlike many people who who say they will no longer show up at their current places of work if they win lottery, Chobani workers as shareholders will have to continue to work and put more effort at helping the company realize its production objectives, since they stand to gain from the company's success.
It is what Ulukaya also said in his New York Times interview that giving the workers the shares or recognizing their contributions and making them co-owners will make them to work harder for the company's success. One thing that is confounding about Chobani's success story and Ulukaya's decision to make the goodies go around and not keep it to himself alone is that the company began operation in 2005, just 11 years ago.