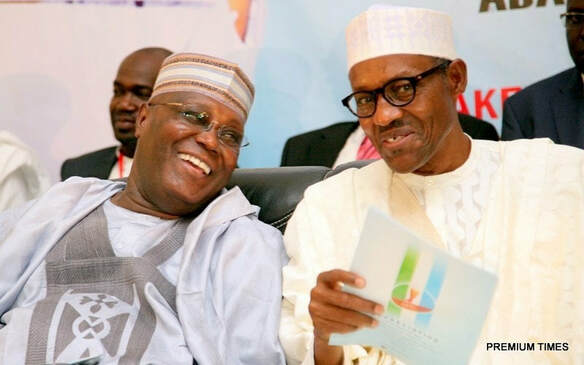 Atiku Abubakar, one among 73 or so challengers of incumbent President Muhammad Buhari for Nigeria's presidency.
Many Nigerians home and abroad are watching developments in their country amid expectations about who will be the country's President among about 75 contenders.
The first two candidates, the incumbent President Muhammad Buhari who is seeking re-election, and Atiku Abubakar, candidate for the major opposition party, are expected to slug it out for the first position and other can take the second position
But wait, many young Nigerians are saying it is their time . And these young Nigerians are following many among the 73 young politicians who are seeking to be President because every Nigeria has the right to aspire to any level provided he or she has the level of education, experience and clout.
Which is why many people are asking whether Nigeria will produce a new breed President against having old politicians recycled despite having not much back in term o human and physical development of the country.
What had given attention to the possible beating of the old politicians happened recently with endorsement of one of the numerous young candidates by the Citizen Forum led by renowned Professor Wole SOYINKA who is also a Nobel Laureate.
The name of the endorsed candidate was given as Kingsley Ayodele Moghalu, a former banker and a professor of economics. Aside from the eyebrow raising caused by the endorsement of Moghalu by the Citizen Forum, there is also another young fellow, Omoyele Sowore.
Sowore had told Nigerians to wait till the election has been held and see how the tide will turn against the old politicians. Though, he LACKS the type of endorsement Moghalu has, he still believes that he has enough grassroots support and clouts among the educated Nigerians at home and abroad, to chase the incumbent and candidate of the major opposition party out of office and political relevance.
Many Nigerians approve the emergence of young people vying for the number one office, but they disapprove of the high number of young candidates and have expected that they should have formed an alliance that would have strengthened their position against the old politicians and backwardness in the country.
As Nigerians line up around the country voting with their PVC cards this Saturday, after an unexpected postponement of the exercise previous Saturday, the debate about who would emerge victorious has become an order, with more eyes on the incumbent and Atiku, the candidate for the major opposition party.
Many people are saying Atiku will defeat Buhari. On the other hand, supporters of the President and the ruling party are relying on the power of incumbency especially the works they say the President has to showcase about development projects and his score for the fight against corruption. Opposition parties in general say that HUNGER has become a major STAPLE in the country and that the President and the ruling party are careless about Nigerians and their well being.
Bad economic situation occasioned  by high Unemployment rate and dwindling power of the country's currency in exchange with the dollar is one of the reasons that make Nigerians think that a change of the person on the driver's seat is desirable.
They also cite the killings in so.e parts of the country by herdsmen and the continued Boko-Haram insurgency. The pang of HUNGER seems to have made some Nigerians to say he'll to fight against corruption, because to many Nigerians the fight against corruption has been highly politicized and yet the Mann has seized to fall from the top to the less disadvantaged Nigerians.
The ruling party has said that the first three years has been for cleaning up the gangantuan mess created by the orgy of corruption in the 16 years of the former ruling party in power. Many Nigerians are quick to say the fight against corruption fighting corruption and cleaning house is no excuse to abandon caring for their well being.
Eyes are on Kaduna State, Kano State, Sokoto State, and the Middle Belt States as the battleground States and that whoever win majority of those states may emerge the next Nigerian leader. This is considering what observers consider as a fact that the West may vote for the ruling party to continue to have the current vice president who is from that part of the country in office as the second in command, and that the East may vote unblock for Atiku to have one of their own running as ATIKU'S running mate as the second in command.
No one seems to reason that the North may as well vote for the incumbent to continue in office for the North to continue to have its own as the leader of the country. But keen observers say that does not matter, since according to them Atiku is also from the North. Pathetically, there has been no information of any new breed politician pulling any weight in all the election tit-bits as they appear on news headlines.
All the news are about Buhari and Atiku struggling to make head ways around the country. Well, let's wait and see what we become the candidature of the new breed politicians.
HTML Comment Box is loading comments...
NEWS AND FEATURES
News & Features Around The World