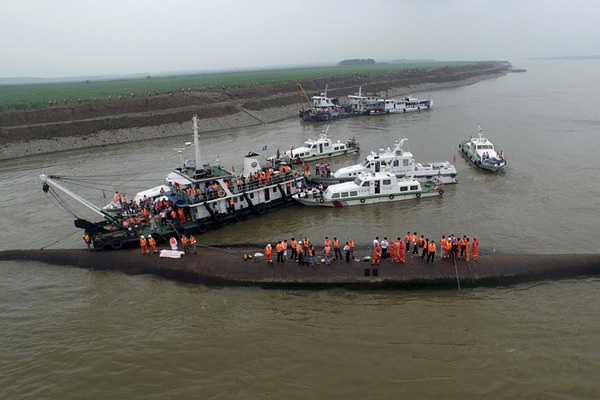 Searching for survivors. (Courtesy: Stringer/Reuters and the Christian Science Monitor)
The news of another shipwreck in China's Yangtze River with about 458 passengers on board, and only five of the 458 saved alive as at the morning hours, was a reminder of Seoul ferry wreck that claimed so many lives.
News reports said that most of the people in the boat that capsized on Monday night were mostly 50 years and over.
Accidents such as the latest shipwreck remind us of how perilous life is and shipwrecks and plane crashes have become common places and travelers arriving at their destinations these days have cause to thank God.
When a ship captain is not careless, or a flight captain and his assistant are not at loggerheads or a flight captain is not mentally incapacitated, enemy combatants could wreck an aircraft or an aircraft could just disappear and for months no one knows its whereabouts.
What has become certain in the affairs of men is that everyone will die, but no one knows how he or she will die. Certainly, no one will live forever. Shakespeare wrote that death will come when it will.
Beowulf said let every man do things to proof himself in service to humanity before death comes. Some People die in old age peacefully on their beds without illness. Some people struggle with one illness or another before succumbing to the cold hands of death. Some people get killed at their prime serving humanity and their names immortalized.
The people who die peacefully in their old age may not have chosen to die that way, but they have no choice against fate. So are people who die struggling with illness either in youth or in old age, and others who get killed early in their lives serving humanity.
People who die in plane crashes or road accidents and shipwrecks did not choose to go that way, it is all about fate. Imagine thousands who have perished pursuing breakthroughs through the Mediterranean Sea. No one who get killed on the street or in his house or in an accident chooses that way of death, but things happen.
Just this last weekend, the news of the death of Beau Biden, son of the United States' Vice-President Joe Biden, came in the news. He was 46. He had been attorney General of his state and he was planning to run for governor's office. What could have prevented the medical advances recorded over the years to save his life?
The news of Beau's death reminded this reporter of two incidents in the past that have become registered in his consciousness. The death of an eight months old baby and another young man who suddenly died during his Higher School Certificate days. The eight months old just had mere cold. She was taken to the hospital for doctor's attention, because her parents had health insurance made possible by her father's employer. At the hospital, she was treated for cold, but suddenly her condition became worse. She could no longer breath. Doctors fought through the night to save her life but she died in the early hours before 0600 in the morning.
The young man was a good soccer player. He came for his higher school certificate education from Iyin Ekiti in Nigeria to Oduduwa College, Ile-Ife. He was popular in the college as a good soccer player. He redeemed the college's soccer team from avoidable defeats. He was found ill just one morning and was rushed to the hospital. The next thing was the news of his death. Later, news spread that he had tetanus.
When a loved one dies, a part of us dies too. For as Tracy Morgan, US comedian who survived a road accident, but lost his friend  in the accident said on NBC's 'Today', "Bones heal, but the loss of my friend will never heal." It is about how death diminishes us and humanity.
NEWS AND FEATURES
News & Features Around The World