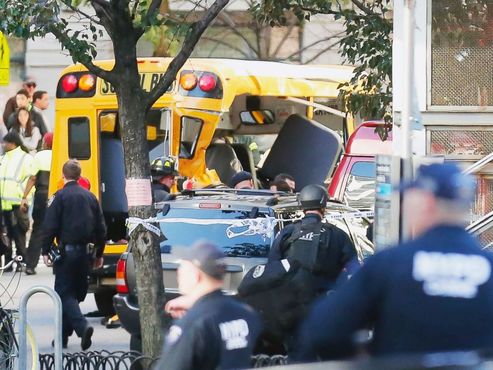 The yellow education bus that stopped evil on its path
Since it has been reportedly confirmed that the incident on Warren and West Street on Tuesday is a terror attack, observers have been free discussing the scenario and seeming lack of safety, around the World Trade Center.
News reports have also affirmed that the Tuesday' s attack that claimed mostly Argentina's tourists' lives happened just about the next block to the WTC on West Street.
Eye witnesses aid that the attack happened between Chambers Street and Warren Street, about two blocks away from WTC, and described in a news report by the New York Post as in the shadow of the WTC.
Of course, from Tuesday after the attack, police rail guards condoning off the street from Warren Street to Murray Street intersection remained in place until about 06:15 pm on Wednesday, when the rail guards were removed from the Murray end of the West Street, and the road opened to the traffic once again from Chambers through to Warren to Murray and Vesey Street.
People are saying that if the attacker had succeeded crossing from Warren Street to  Murray Street and to Vesey Street intersection in his attack on Tuesday, the WTC and the World Financial Center, would have been on his left and right of the Vesey Street intersection.
The attack by the terrorist is still unsettling in people's minds as to his original aim. Question is still being asked whether the attacker's aim is the Vesey and West Street intersection with a large number of tourists.  The question is based on the large number of people that pass through the bike lane and the cross street from the WTC and the WFC, in comparison to the traffic on Chamber and Warren Streets on West Street..
It is discernible that the traffic from Chamber to Warren and Vesey increases as people gets closer to Vesey, because of the large number of tourists at the WTC and WFC, and workers in major companies around there. Many people are saying that the saving grace that saved the situation and limited the damage from Tuesday's terror attack was the yellow education bus that stopped the attacker's pick up truck on its path at Warren and Murray.
People are saying that if the yellow education bus had not stopped the fiend, he would have raced through Murray Street to Vesey Street intersection and the story about the attack would have included another attack and death at the WTC and the number of casualties would surely have been higher.
People are saying seriously that the attacker may have thought he was already at the Vesey Street and West Street intersection when he veered into the bike lane at Warren Street and unaware that Vesey Street and West Street intersection was two blocks away. And that as he raced along the path toward Murray Street to hit Vesey Street, the yellow eduction bus acted as a gracious stopper of the evil.
However, news reports that the terrorist had carried out a surveillance and knew where he wanted his attack and killings was convincing enough that he might not have had the vesey Street intersection in mind. Yet, people around here asks that security agencies pay more attention to the WTC and the Vesey Street intersection on West Street.
Click to set custom HTML
Comment Form is loading comments...
NEWS AND FEATURES
News & Features Around The World