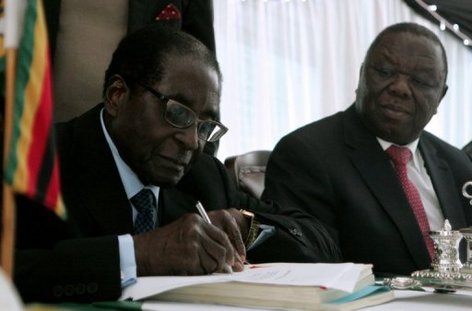 Robert Mugabe and Tsvangirai (Courtesy: yahoo!.com)
Zimbabwe’s opposition leader, Morgan Tsvangirai, says the ruling party, led by Robert Mugabe, has declared Mugabe the winner.  What the opposition’s argument means is that Robert Mugabe has unilaterally made himself president for another term before the country’s official presidential result’s announcement. Mugabe’s supporters are jubilating. The African Union, AU, has described the election in Zimbabwe as free and fair against other observers’ remark.
Nigeria’s former president, Olusegun Obasanjo was reported in some publications that he said the election as credible and fair.
Now there are photographs being published showing Tsvangirai before a large crowd of supporters at a campaign ground that will make one to wonder how a man with such a mammoth number of supporters could have lost an election.  The United States and Britain have expressed reservations on the outcome of Zimbabwe’s election. The U.S. and Britain seems to have forgotten that this will be Zimbabwe’s fifth presidential election and that Mugabe has been featuring in all the elections. Secondly, he had ruled for two consecutive terms with the opposition as a partner in government. If he had won the first election, won the second election, won the third election and won the fourth election, how could he have been expected to lose the fifth?
Another reason America and Britain’s reservation may not be accepted with a pinch of salt is the two country’s seeming silence over the Egypt’s army’s coup and which the civilized world has refused to accept as a coup against a constituted authority. The AU has refused to accept what happened in Egypt as a revolution. And many people on the streets said the Egypt’s army action was a coup. Over 100 people had been killed by the law enforcement in the uprising against the army, since Mohamed Morsi’s removal and abduction by the army. Morsi’s family and supporters have said they don’t know where Morsi has been taken. Rather than let his family know where he is, the army chooses to show foreigners where he is and the foreigners have painted a picture expressing a sense of loss for keeping a man in Siberia within a country and yet cannot say where he is, because the army does not want people to know where he is. Now the authority in Egypt says it wants to force Morsi supporters out of their protesting grounds!
In a comparison of Egypt and Zimbabwe, people are saying what happened in Zimbabwe several years ago, when Mugabe assumed power was not sack of a constituted authority, but a victory of the right against the wrong. Further, it is believed that  Mugabe as an old warrior may have a reason for keeping himself in power, probably fearing that the power he helped fought and displaced may stage a coup to take back what has been deprived them. And so it has become a tale that if this guy has won four elections, how can he lose the fifth? Additionally, can the world not see that Zimbabwe has a life president and whose age at 89 shows he may likely die a president? Does the world think everyone will be like Nelson Mandela?
Mandela is an icon for several reasons. Mugabe is not seeking to become an icon. He was not only jailed, he fought a war as a freedom fighter. He believes he is still fighting his foes who put him in jail. People are saying that whatever are Mugabe’s reasons for staying in power indefinitely is supported by pluralistic theory of value, just like what may have prompted Mandela's jettison of political power.