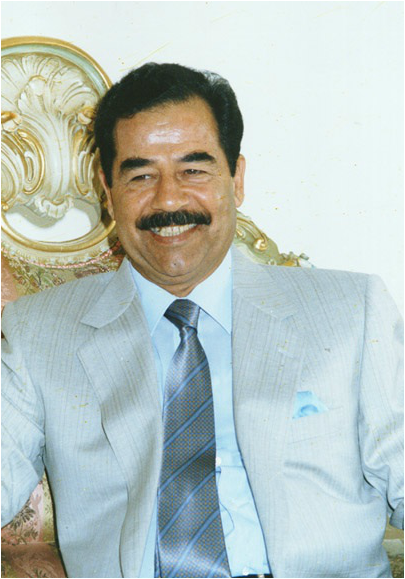 Saddam Hussein in good times (Courtesy: famous faces.us)
Walking past an optician's store at Battery Park, Downtown Manhattan, New York City, there are words on marble visible through the glass that read, "There is no certainty, life is an adventure." These words will easily remind anyone about life's struggles, pursuing goals, failing to realize certain goals and scoring where one least expects.
Again, these words drive home the words in "Oedipus the King" by Sophocles that no one should jubilate of achievement until one may be certain how life will end. Meaning that until the end of one's life, anything contrary can still happen that will throw all reasons for jubilation under the bus.
People who have read "Oedipus the King"  know about Oedipus' experience that despite having been a King, who helped his people conquered an evil and held in high esteem, before the information of having unknowingly married his mother and had children for her blew everything up, because the curse on the land was traced to his misadventure. A look at Oedipus the King and Saddam Hussein as rulers reveal certain similarities.
Both were rulers; both handled opposition with iron fists and both never thought that was any evil they had committed capable of haunting them. No one definitely would have expected a man so boisterous in a photograph as shown here would later be hiding in a hole like a rat when troubled found him, just like Oedipus forcibly removed his own eyes at discovery of the truth.
On Monday, the news said the tomb of former Iraq's strongman, Saddam Hussein, in Tikrit had been destroyed and a picture showed his mausoleum in rubble. What this will immediately remind any reader with knowledge of the scripture is the scriptural statement, "Vanity upon vanity, is equals to vanity."
Apparently, Saddam Hussein would not have thought at the beginning of his rise to prominence that his end would be as the world later witnessed - an end in a gallows.  Of course, the world was shocked at what happened when he was seen matched to gallows, not by any other but by a government that took over after he was displaced and was said to have been found guilty of crimes against humanity.
The BBC report described the mausoleum before its destruction as featuring a marble octagon and a collection of fresh flowers in the middle. Wasn't it gracious that Saddam's people were given his body for decent burial despite dying in the gallows? Isn't it unfortunate his resting place has been subjected to this experience?
One good piece of news is that Saddam's body has reportedly been removed by his people from the mausoleum before the battle between the ISIS and Shia militants fighting alongside Iraq soldiers. But the destruction of the mausoleum is causing another trouble, which report says may pitch the Sunnis against the Shias. The Shias have been accused of destroying the mausoleum, allegedly removed Saddam's pictures around the mausoleum and replaced them with their own flags.
No one is certain about what determines people's end. But religious people will say whatever one sows it is that one will reap, and that the evil that people do lives after them. Ironically, not lesson from history has made people desist from evil to pursue peace. And what about good people who have no record of evil against others the world has seen ending in violence? Welcome to a world of adventure with no certainty.
NEWS AND FEATURES
News & Features Around The World